A year ago, I released Fireworks at Midnight, thinking I would leave the world of A Witch’s Night Out forever (I’d planned the series as a trilogy). Unfortunately, my characters had other plans. Since I’d sicced Madame Eve on her cat familiar, earth mage Shelley Dupree insisted I make things right. To be fair, I’d already given her a magical handicap, forced her under house arrest, and buried her in bills—taking away her feline companion did seem a cruel and unusual punishment.

It took me two months of fictional time to even the scales with Feline Valentine.  Part of Decadent Publishing’s 1Night Stand series, my interracial paranormal romance is set in Washington, D.C., where magic-wielding folk try to live alongside us pesky humans. It’s my first true “shifter” AND “foodie” romance (talk about ticking two boxes with one book), and a quick read of the blurb should tell you what I mean.
To celebrate this unexpected return to my favorite series, I’m giving away a $15 gift card. To enter, leave a comment here and drop your details in the Rafflecopter widget at the bottom of this post [or at my website: http://www.taraquan.com/felinevalentine].

Feline Valentine (A Witch’s Night Out) by Tara Quan 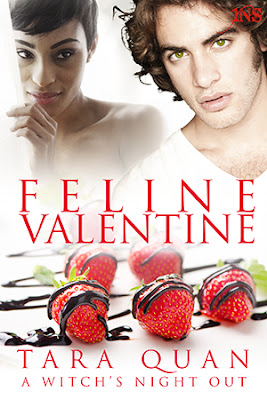 Under magical house arrest in her great-grandmother’s suburban cottage, college graduate and reluctant earth mage Shelley Dupree whiles away most mornings spying on the warlock next door. Though erotic daydreams offer some distraction, she faces long working hours, cash flow problems, and a repeat burglar. On Valentine’s Day, she sets a trap for the mysterious intruder, intent on ending his crime streak once and for all. But her scheming cat familiar foils her best-laid plans, and, with a little help from Madame Eve’s 1-Night Stand service, she discovers a far more dangerous species of magical feline.
After moving in next to a ramshackle building on the outskirts of Washington, D.C., pastry chef Adrien Chatdurois is plagued by repeat sexual fantasies starring the same curvy brunette. In a state of constant arousal, he devotes his early mornings to grueling exercise and spends the rest of his day handcrafting the city’s best chocolates. When his younger brother stirs up trouble on the shop’s busiest day, the frustrated shifter is forced to pay a surprise visit on his reclusive neighbor. He soon learns not all witches are wart-covered hags, and one in particular might prove the most delicious of desserts.
Genre: Paranormal Romance, Romantic Comedy, Interracial/Multicultural
Buy Links: Amazon | ARe | B&N | iTunes | Kobo | GooglePlay | GoodReads
Check out the rest of the series here!

Extras (for you to use, or not use, as you see fit)

About the Author
Globetrotter, lover of languages, and romance author, Tara Quan has an addiction for crafting tales with a pinch of spice and a smidgen of kink. Inspired by her travels, Tara enjoys tossing her kick-ass heroines and alpha males into exotic contemporary locales, paranormal worlds, and post-apocalyptic futures. Her characters, armed with magical powers or conventional weapons, are guaranteed a suspenseful and sensual ride, as well as their own happily ever after. To receive updates about her new releases and get a free sexy read, subscribe to her mailing list at www.taraquan.com/newsletter. 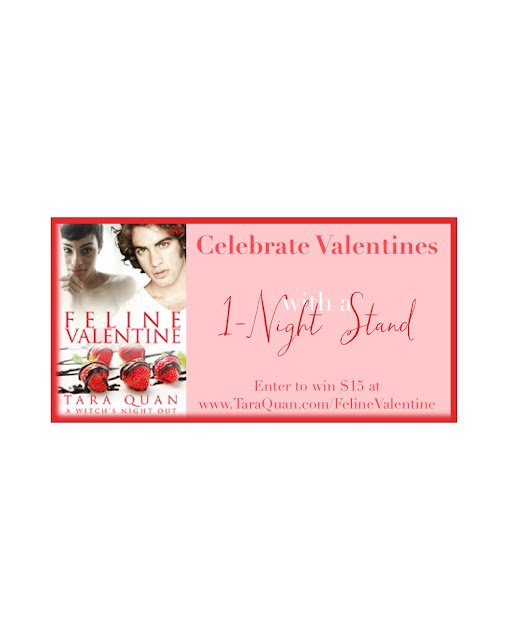 Excerpt 3 (R-Rated) – 635 Words
“Stop hogging the binoculars. It’s my turn to ogle the warlock next door.”
Ignoring the high-pitched whine, Shelley Dupree zoomed in on a pair of sweat-slicked pecs. A prolonged spying session on her new neighbor seemed the perfect cure for Valentine’s Day doldrums. Though Dulcina, her best friend and cat familiar, could turn into an absolute pest when thwarted, the reward for tuning out her incessant requests superseded all risk. After all, Shelley needed to stock up on copious amounts of drool-worthy imagery. How else was a single witch on house arrest supposed to while away the most romantic night of the year?
Prolonged sexual frustration had long since warped her brain, part of the reason she couldn’t tear her gaze from the delicious male specimen on the other side of her crumbling wall. As she watched the man execute a strict pull-up over his doorjamb, her lips tingled. She imagined trailing them over his lightly tanned chest, pictured herself tracing those rippling muscles with slow, sipping kisses.
Her tongue darted to wet the corner of her mouth as she envisioned sliding her hands under the waistband of his red workout shorts. She’d fuel his arousal with teasing strokes before catching the fabric between her teeth and yanking the garment off.
His body lowered, filling her magnified view with a visage stunning enough to choke off her next breath. Thick fringes of sooty lashes framed dreamy, moss-green eyes. His pale skin darkened to a rusty hue as he sped up the repetitions. Glistening with perspiration, midnight curls clung to his sharp, slanting cheekbones. An overlong forelock snaked down to graze his pronounced nasal bridge.
With his lips pursed and eyes narrowed, the intense, menacing expression he wore added fodder to her prolonged sexual fantasy. She could almost feel his coarse chest hair rasping her chin and cheeks, taste salt as she explored the expanse of taut, supple flesh. Her pulse raced, her erratic heartbeat a warm flurry over each fingertip.
As if by magic, his waistband slipped down his hips, sending his shorts pooling to his ankles before they dropped to the floor. Entranced by the unexpected striptease, her attention zeroed in on his penis. Even from afar, the warlock didn’t disappoint.
With a contented sigh, she imagined tracing the ridge, swirling her tongue over the long, thick shaft before taking the engorged tip into her mouth. While she contemplated the way he might taste, deep grooves formed between his thick brows. His full, sensuous lips flattened into a grim line.
She closed her eyes and ventured deeper into the familiar daydream, a moan catching in her throat as his erection slid back and forth over her flesh. Instead of the binocular’s cold metal chilling her hands, the toned, flexing ass she’d always admired warmed her palms and fingers. She took him deeper, until she could almost feel the head brushing the back of her throat. A hoarse, masculine groan echoed between her ears when she hollowed her cheeks and—
“Meow!” A quintet of sharp claws swiped down her calf, the sudden pain shattering her erotic fantasy.
Spinning around, she nudged at the brown, shorthaired cat with her toe. Her friend must really want attention if she’d resorted to shifting into her hated feline form. A familiar stockpiled more magic as animal than human, so the amount of time her companion spent coughing up fur balls around the house directly correlated with the accuracy of her premonitions.
For whatever reason, the witch preferred to keep the future at bay.
“Damn it, Sweets.” She tapped her foot on the diabolical cat’s head. “Scat. If you don’t stop bugging me, I’ll tell your boyfriend you’ve been gawking at another man on a daily basis.”
Arching her spine in a sinuous stretch, the feline stuck out her tongue.

Alternative Guest Posts
Author Interview
When and why did you begin writing?
As a kid, I read a lot. I don’t know when it started, but I remember at times wanting to change the ending, the pairing, or specific scenes in certain books. That’s probably why I wrote fanfiction in my teens, and I progressed to creating my own worlds after finishing college.
What inspired you to write your first book?
My first manuscript, which will forever dwell in the bowels of my laptop, was a vampire romance inspired by my love of Nalini Singh’s style of writing. My first published book is a retelling of Rapunzel, set in a post-apocalyptic zombie world, and it was inspired by a creative submissions call.
Do you have a specific writing style?
Despite numerous failed attempts to emulate my favorite authors, my sense of humor gets the better of me. My stories tend to be funny, light-hearted, and a little tongue-in-cheek. Of course, I’m a romance junkie and it shows.
What books have influenced your life most?
There are too many to count. I think my path to becoming an (English-language) bookworm started with Enid Blyton’s The Enchanted Wood.
If you had to choose, which writer would you consider a mentor?
Although I adore Nalini Singh as a reader, I think my writing style most closely approximates that of Julia Quinn. I think I learned a ton of language tricks by reading all her books.
How did you come up with the title?
This one was easy. It’s a story with a “big cat” shifter, and it’s set on Valentine’s Day. I was so stoked when I looked up Feline Valentine on Amazon and discovered it wasn’t taken yet.
On the subject of titles, what book are you here to plug?
Alas, I must end with a moment of shameless self-promotion. The paranormal romance I’m here to plug is Feline Valentine. If you get a chance, check out the sample read below or on my website (http://www.taraquan.com/felinevalentine). Until the end of February, I have a giveaway going on for a $15 gift card.

What type of reader are you?
I have a confession: I’m a romance reader.
Growing up, my parents wanted me to express an interest in the classics. So I faked my way through works by Charles Dickens, discovered I very much enjoyed anything by Jane Austen, and realized I didn’t have the patience for Leo Tolstoy (no, not even Anna Karenina). For the sake of dinnertime debates with my better half, I’ve braved Richard Dawkins’ The Blind Watchmaker and skimmed Jared Diamond’s Guns, Germs, and Steel.
But a quick perusal of my past Amazon.com purchases reveal the undisputable truth. My favorite authors are Cherise Sinclair, Kresley Cole, and Nalini Singh. The books I read all fall under the same genre.
So what makes me a romance reader?
1. I can’t stand it when books don’t end in a happily ever after. In fact, I almost always read the final pages of every book first, just to make sure nothing bad happens. As much as I adored Erich Segal’s Love Story, I will never re-read it. The books on my shelf with worn pages and creased spines are ones with endings that make me smile. Many of them also feature covers with lace-lined bodices and handsome rogues.
2. I’m a sucker for a love story. Don’t me wrong—I’ve strayed from the romance genre on several occasions. The fantasy lands of George R.R. Martin’s The Song of Ice and Fire and the sci-fi planets of Frank Herbert’s Dune both lured me to sample other types of fiction, but even those stories contained characters who loved and made sacrifices for love.
What can I say? I’m a hopeless romantic. I like reading books about people who fall in love, who then live happily ever after, and, who, upon occasion, have a bit of kinky sex along the way.
To celebrate an unexpected return to my favorite series, I’m giving away a $15 gift card. To enter, leave a comment here and drop your details in the Rafflecopter widget at the bottom of this post [or at my website: http://www.taraquan.com/felinevalentine].